< 1988 Bochum production
View source
watch 01:36
We're Getting Mutants in the MCU - The Loop
Do you like this video?
Play Sound

The 30th anniversary of the German production saw major revisions, similar in scale to the 1992 "'New' Starlight Express" in London. These revisions were developed from in the 2017 workshop.

Having kept his distance from the production for many years, Lloyd Webber took a hands-on role. He has described Starlight Express in Bochum as "very good now... we've done a lot of work on it."[1]

The script was altered to clarify that Control is playing with toy trains. He refers to Rusty as "the first train I ever got (I was six)" and says of Pearl, "I have bought a new wagon, she cost three weeks' pocket money". The storytelling concerning Pearl and Rusty's relationship was also tightened.

Multiple changes were made:

The story was also refocused to redress the gender imbalance. To this end, a female character was added to each "set" of characters:

In the opposite direction, Volta became male.

The score was considerably rewritten, particularly in the first quarter.

"Crazy" was moved earlier in the show to become Rusty's introduction. "Whole Lotta Locomotion" was replaced by "I Got Me", a girl-power anthem developed from a theme from "Rolling Stock," as the coaches prove their worth after an argument with the engines.

Certain elements of the 2017 workshop were carried over, one such being that Control breaks into the Overture crying "Stop that boring music!" to introduce the National Engines at the beginning of the show rather than just before AC/DC. The Overture consists of the same musical arrangement as the introduction to the "Starlight Sequence", and as such is one of the key musical themes in the show, but Control's line gets a laugh nearly every time, leaving way for the more serious moments concerning the musical arrangement later in the show.

A small change was made in 2021, adding flags to the Megamix. In 2022, due to the conflict between Russia and Ukraine, Turnov says "Hashtag Oligarch" instead of "Putin's shooting star". In addition, Turnov is the only National Engine who doesn't wave his flag during the megamix as of March 2022, as well as his flag not being flown during his introduction at the beginning.

Electra's costume changed from red and blue to black and silver. Caboose also had a major redesign, absorbing a more mobster-like design, with a pork pie hat and red pinstripes on his now navy coloured base.

All the makeup designs were softened, with minimal use of vivid colours and strong geometric shapes, possibly due to the heavy makeup being a burden on the actors' skin. 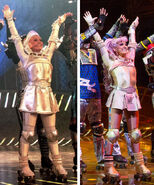 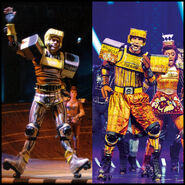 Rockies in the Finale, with Mama and ensemble

The cast list was announced as the new cast began rehearsals in February 2019.

The cast list was announced as the new peformers began rehearsals in February 2020. Due to the COVID-19 pandemic, however, the show was put on hiatus before performances began.

Following a shutdown due to the COVID-19 pandemic, Starlight Express resumed performances with a new cast in October 2021. The cast list was published in July 2021 as rehearsals began.

Due to COVID, auditions were unable to be held. Most of the cast stayed in and the brought replacements from previous years. Because of this, skate school did not take place and rehearsals began at the beginning of May 2022. The cast list was published in May 2022 before the new cast began.