Following the closure of the original London production in 2002, there was considerable public appetite to see Starlight Express visit other parts of the country.

After the closure of the 2003 US Tour, many of the properties of that production were used to tour the UK, including some new music written by David Yazbek and the 3D race footage. Much of the new material used on the US Tour was revised back to the material used in London, as many of the cast and production team had worked on the original production.

The 2004 production presented a stripped-down version of the now-familiar Starlight set: the bowl, the split-level set, and a lollypop-shaped track into the stalls that the production team nicknamed 'the pod'[1]. Some of the technology from the previous US tour was brought across, such as the revolving stage, while a lot of the set was built new to suit UK theatres.

Although the set was designed to be portable, it proved too big for some regional theatres, so for the tour's second leg in 2006, the set was replaced by a open stage with arches across the back of the stage, and 2 portable ramps the cast would push on at key points in the show.

The UK Tour was a development of the 2003 US Tour, however many of David Yazbek's contributions to the score were removed in favour of the later London score. Where the US Tour had been extensively re-written in the underscoring and elements of scenes such as the individual introductions in "Freight", only "Whole Lotta Locomotion remained of the new material. However even this number was updated with a new introduction as the coaches introduced themselves, paraphrasing the original lyrics of "A Lotta Locomotion.

Unlike the previous tour and the London show, "Girls' Rolling Stock" was cut from this production. The first tour date, in Manchester in November 2004, saw Pearl and Rusty's big number being "Next Time You Fall In Love" as in London - however shortly after they sang the US Tour version of "Only He".

Control was recorded fresh for this new production, by a young Georgina Hagen. As Peter Hagen's daughter, Georgina had grown up very familiar with the later London Control recorded by Tara Wilkinson, and Georgina mimiced many of her mannerisms while also having a level of authenticity as a twelve year old.

The only change to the 3D filmed races from the US tour to the UK was the new recording of Control. Control's script is much closer to the London version, including laying out the rules of the race: "We have two eliminator heats, the first two trains from each heat make the Final. Got that? Two heats, two qualifiers from each". Unfortunately this dialogue doesn't square up to the filmed races, where there are only three trains per heat as opposed to the live races in London with four trains in each race. No mention is made of a fourth finalist at the end of heat 2.

The first UK tour opened in November 2004 at the Palace Theatre in Manchester. It ran until September 2005 and, following a short break, went back on the road with a new cast from February 2006 to March 2008.

Press materials referred to the 2006-2008 leg as a separate production. Artistically, however, it was a continuation of the first production, albeit using a revised, smaller set and some new cast. 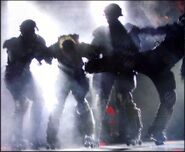 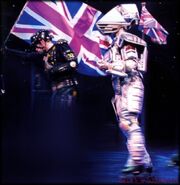