At last, one of the best loved and longest running musicals in theatrical history explodes onto the South African stage with a brand new production helmed by acclaimed, award-winning director JANICE HONEYMAN.

The show opened with "Control", a young boy, onstage playing with his train set, in a departure from the usual staging of Control being a recorded voice-over. Although Krupp is not included in the licensed UK Tour version of the show, Hip Hopper 3 doubled to provide an extra Component for AC/DC. The production also included "The Starlight Express" onstage, giving Poppa's actor a new costume in silver. The swings featured onstage as extra carriages and Marshalls.

As the first licenced, non-replica production this show had "carte blanche" with the design. The set design featured premium onstage seating, creating an in-the-round performance space. As seen in the video simulation, the set design contained easter eggs on the theme of the train design, with the overhead plan resembling an oncoming steam train. Similar to the UK Tour, the set included two small mobile ramps.

The costume design intentionally scaled back the larger-than-life "train" elements of John Napier's work, aiming for a human scale, character-led interpretation. Although the costume designs did not include belts, the "handles" were included as essential to skating in train formation. Also, while the base costumes kept the feel of regular street clothes, many characters added "race packs" to their costumes for the races. 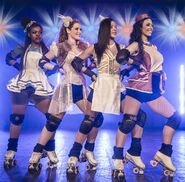 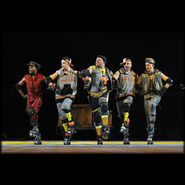 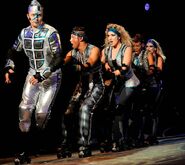 Rusty and The Starlight Express

"One Rock'n'Roll Too Many"