Adam Sheffield went to Jackie Palmer Stage School in England, where he was awarded the Bocks Young Achiever Award for his acting talents. Afterwards he attended Stella Mann College in Bedford.

He understudied Marton in "An Enemy Of The People", played in "The Stars In Their Eyes", "Me And My Girl", played Gavroche in "Les Misérables" and Street Kid in "Dick Whittington". He also is part of two "Harry Potter" films.

As of October 2016, Adam has joined the Starlight Express band as a drummer. 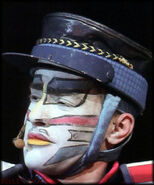