Since 2013, Starlight Express has been available to schools and youth groups in a fairly limited license.  The licensed production is effectively the 2012 UK Tour version of the show, including Duvay and "I Do"

Previous to this, there have been unlicensed productions around the world, walking a fine line legally but having freedom to produce a really fun show!

Regional productions are also taking place across the USA, under different licensing restrictions to the UK. As of 2019 the Adult rights to perform the show have been withdrawn in the UK prior to updating the show with material from the 2018 Bochum show, but youth productions continue.

Please add info about your own production! Where, when, who put on the show,and link us to photos/videos.

Motiv8 Productions were the first adult group to be granted permission to perform Starlight Express . Through putting on this great fun show, Motiv8 were able to raise £5000 for Macmillan Cancer Support

You would have been able to catch up with the rolling stock at Yeovil's Octagon Theatre from May 6th to May 14th 2016. It played eight performances, four full houses and go eight standing ovations.

Rehearsals made it to the Western Gazette

Photo gallery from the Western Gazette

Some photos from the above gallery

Running for 7 shows (3 matinees and 4 shows), it was performed to over 3500 people and was met with great praise by audiences of young and old alike for these students who only in January of the same year had first set foot in rollerskates. 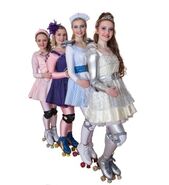 This production also appears to be using the Tuacahn costumes, however with a new, sleeker (but clearly coded bad guy) Electra.