Some of his theatre credits include Zorba, Gypsy and Georgy Girl on Broadway; La Bohème at New York City Opera; Kindness of Strangers and Survival of St. Joan Off-Broadway and Landscape of the Body at Joe Papp's Public Theatre.

On television, he co-starred in numerous TV Pilots including Jumpstreet, Heartbeat and Liz Swados' SOS; he had a recurring role in CHIPs; and appeared in the soap opera Search for Tomorrow which won him the Los Angeles Film Critics' Award for Best Actor.

His first feature film was The Brotherhood with Kirk Douglas and has been featured in The Idolmaker, Indian Wants the Bronx, Mio Fratello, Anastasia, Invasion U.S.A. and, most recently, as Ronnie Long in Universal's Playing for Keeps.

Anthony writes and arranges music and has a pop group in New York, Ariel and Anthony, singing and performing on piano and saxophone. While writing and producing a radio show, with his partner Maya Ryan, he is also working on his second screenplay.

Anthony would like to dedicate this performance to his family and friends, who still think he is on vacation! 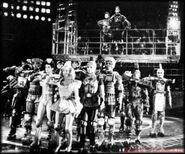 Dustin, 1990 US Tour
Community content is available under CC-BY-SA unless otherwise noted.
Advertisement