Don't make me give up smoking!

Female
Ashley is a smoking carriage. She featured in most productions of Starlight Express between 1984 and 2018.

She has a bad habit when it comes to smoking. She is also mature and experienced, offering worldly relationship advice to Pearl and Dinah.

Ashley was part of the original passenger train, alongside Pearl, Dinah and Buffy.

In the Western world, smoking has been on the decline since the 1980s. In the original production, Ashley sang that she'd "tried to kick the habit". In later versions of the show, she sang that she was "the last [smoking carriage] in the land".

Smoking was banned on trains in the UK in 2005, and in all workplaces, including pubs and restaurants, in 2007. This meant that, when a UK tour was mounted in 2012, young audiences would have no memory of smoking cars. They might oppose also smoking in principle. Ashley was replaced in English-language productions with a sleeping car, Duvay, although she remained in the German production.

In 2018, Ashley and Duvay were replaced by Belle the Bar Car and Carrie the Luggage Van.

In the Mexican production, Ashley's name was translated as "Bacha".

Ashley is a sassy, independent, and confident smoking car. She is also the defacto "big sister" of the coaches, giving them advice. She is incredibly mature whose been around the tracks. Instead of racing, she'd rather be smoking a cigarette. She is closest to Buffy and friends with Pearl and Dinah. Ashley, as her name suggests, has a habit with smoking. In her part in A Lotta Locomotion, she says that she knows the affects of smoking but her insides are used to it and that she smokes when she's scared.

In the original production, we first meet Ashley as one of the four coaches brought in by Rusty in "Call Me Rusty". The girls don't think Rusty's aims of racing are wise, he'll only hurt himself, he doesn't have a chance. In "A Lotta Locomotion", as she tries to discourage Pearl from racing with Rusty. Ashley hooks up with Bobo for the races, but they come second to Poppa and Dustin. But Ashley and Bobo remain close, with him giving her, Dinah and Ashley a lift during The Rap. Ashley's left trying to pick up the broken pieces of Dinah's self confidence in Girls' Rolling Stock, with Buffy and Belle. After the final race, and Rusty and Pearl's story has played out, Ashley has a solo moment to reflect "Now steam is the winner, now steam's back in style, maybe smokers might rate an occasional smile".

In the revised London show, Bobo and Ashley make it through to the final races, but once Greaseball has uncoupled Pearl, he needs another partner, and steals Ashley from Bobo. At this point Buffy is racing with Electra, and the two friends bail before the big crash. Ashley also took a more prominent vocal role in the revised show, taking over Belle's lines where they remained.

In the German production, Ashley races with Espresso rather than Bobo, and it is Ruhrgold who makes it into the final races.

In the 2004 UK Tour Ashley had no major contributions to any of the songs other than the sexually-loaded Whole Lotta Locomotion, and is reduced from secondary principal to being an ensemble role.

Ashley's costume is shades of Tobacco brown, with ashtrays on her bodice, fine wooden marquetry, and the suggestion of comfortable furnishings in her skirt. Her hair is styled up into a chimney. 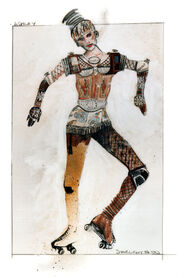 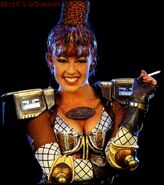 Replaced by Duvay the Sleeper.