I'm a Sleeper With a Heart of Gold

Belle, the Sleeping Car is a character who featured only in early productions of Starlight Express. An old coach, Belle once raced with Poppa, and, like him, has fallen on hard times in her old age.

The 2018 updates to the show in Bochum introduced Belle the Bar Car. Despite sharing the name, this character is unrelated to Belle the Sleeping Car.

Belle is warm and motherly toward Rusty and the freight. She is not a part of the passenger train with the other coaches, but she is good friends with them and offers Dinah advice and comfort in "Girls' Rolling Stock". Belle is Poppa's coach from years back and according to some, (if the father-son theory about Poppa and Rusty is true) Rusty's mother. However this theory makes little sense as Rusty is introduced to Belle for the first time in "Belle's Song".

Belle is based loosely on Ella Fitzgerald, and similar blues divas. The name "Belle" in relation to railways is often used for luxury tourist services such as Brighton Belle, a Pullman train. Many of the references in her song lyrics relate to this type of train, such as "A Pullman car when I was made/I went down for the seaside trade".

We first meet Belle as Poppa tries to encourage Rusty, who is despondent about losing Pearl as a race partner. Poppa suggests Rusty take Belle as his partner, but he can't imagine racing with someone so old. Belle sings "Belle's Song" and Rusty changes his mind. She races with Rusty in Heat 2, however they are beaten by Electra and Pearl. Belle goes on to argue Rusty's right to replace Poppa (who won heat 3) in "The Rap" and she comforts Dinah and persuades her to fight back in "Rolling Stock (Reprise) ". Belle then supports Poppa singing "Light at the End of the Tunnel"

Belle's Song is a forgotten gem in Lloyd Webber's repertoire. Originally performed by P. P. Arnold, it is a powerful blues-inspired ballad in which Belle tells Rusty about her life as a luxury Sleeper. It bears contextual similarities to the huge hit "Memory" from Cats, but without the suicidal undertones. It was cut from the show with Belle but the melody is still heard within the orchestrations, sung by Rusty and Dustin.

Belle played a major supporting role in the original London production. She sang a solo song and raced with Poppa.

Her role was minimised in the Broadway production. She still sang her solo, but did not race, only reappearing for the finale.

In subsequent productions, Belle was omitted from the show altogether. She did however, remain in the London production until the revisions of 1992.

Belle's costume is red and worn looking, as referenced in the lyrics of her song. She has velvet swagged curtains for a skirt, one fishnet stocking and broken glass in her 'windows'. She has black hair in braids. Her bodice is suggestive of a Victorian-style corset, lacing up the front. 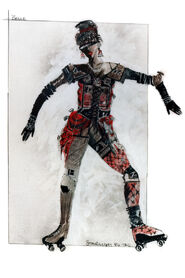 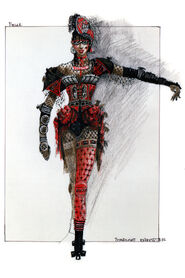 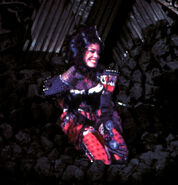