Ben is originally from Manchester. He attended the Guildford school of acting in Surrey, England.

During his studies he worked in numerous productions. He played John Wilkes Booth in "Assassins", Robin Hood in "Twang!" and Danny in "Grease ". He also took over the role of the leading player in " Pippin ". After completing his training in 2014, Ben joined the ensemble of the successful "Wicked" UK tour and was featured as cover Fiyero on stage. In 2015, Ben starred in "snow white and the seven dwarfs" at the marlowe theatre in Canterbury. In 2016, he was also seen as a a in the play " Dick Whittington He was also part of the "last of the mohicans" workshop in London in 2017 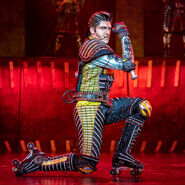 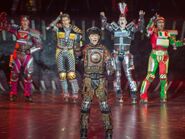 2019
Add a photo to this gallery
Retrieved from "https://starlightexpressmusical.fandom.com/wiki/Ben_Carruthers?oldid=48076"
Community content is available under CC-BY-SA unless otherwise noted.