Starlight Express the Musical Wiki
Register
Don't have an account?
Sign In
Advertisement
in: Cast London, Cast Bochum, Cast US Tour 2,
and 6 more

Her first professional stage appearance was in Emu in Pantoland at the Shaftesbury Theatre at the age of seven. Other pantomimes followed. She then played the part of Pepper in Annie at the Victoria Palace and appeared in the Children's Royal Variety Performance. Other West End appearances include The Nightingale and, most recently, a charity performance of A Cavalcade of Coward.

Her television work includes Eastenders, Starting Out, Big Deal, The Bill, Play for Today, Debbie in Tucker's Luck and Ellen in Ellen and Mr Jo Jo.

Beverley is currently playing the part of Dinah following a successful year as Pearl. In her spare time Beverley is working on a new singing duo called Take Two!

Beverley Braybon is 18 years old and trained at The Barbara Speake Stage School. Since the age of 7 she has made many stage and television appearances including Pepper in Annie at the Victoria Palace Theatre, Debbie in Tucker's Luck and Ellen in Ellen and Mr Jo Jo. Her most recent appearance was as an unemployed roller skater in BBC TV's Stars of the Rollerstate Disco. Beverley has also appeared in many pantomimes, commercials and films and is pleased to be in her second year at Starlight Express. 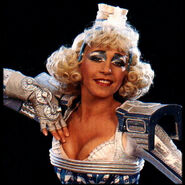 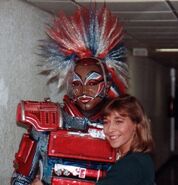 With Mykal Rand as Electra, Bochum 1992 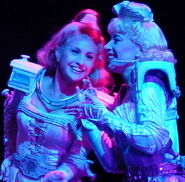 US Tour
Community content is available under CC-BY-SA unless otherwise noted.
Advertisement