Bob Lee Dysinger (Nintendo) is no stranger to Starlight Express having appeared in the London production and the first international tour. The TV series Magic, which aired in Europe, saw Bob playing the role of Nick Thomas for Lombard productions. His film credits include Death Wish III and Bejewelled. Bob's London West End credits include West Side Story and The Mystery of Edwin Drood. His most recent work has been as a magic assistant with Connie Boyd here in Las Vegas. Bob is happy to be appearing in Starlight Express once again.

Bob Lee Dysinger enjoyes travelling since he was a U.S. Air Force Brat. Fortunately his work has allowed him to maintain the travelling and surfing in California, Mexico and Australia. Also, learning how to skate in London has been a load of laughs and bruises, besides adding a few grey hairs. His next goal is to defend the West End Softball Championship Title with Starlight Express. "This work is for my wife who is still wondering why we haven't moved back to L.A., especially with a kid on the way".

Bob Lee Dysinger was born in Tainan, China, and trained as a dancer at Stage Seven Studios in San Diego and studied acting at San Diego State University.

Before leaving the United States, he appeared as Urban in The Caine Court Martial for Centre Stage Productions and also appeared in numerous TV commercials. He toured Europe with The Speedway Show for Esteban Greco and continued working in cabaret for Alan Harding in London.

West End theatre roles have included Montague Pruit in The Mystery of Edwin Drood, Espresso, the Italian train in Starlight Express and Action and Nibbles in West Side Story. Film credits include Death Wish III as a punk.

This is his first time in Australia, so show him a good time! 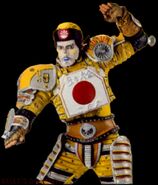 Nintendo, Las Vegas 1993
Add a photo to this gallery
Retrieved from "https://starlightexpressmusical.fandom.com/wiki/Bob_Lee_Dysinger?oldid=44529"
Community content is available under CC-BY-SA unless otherwise noted.