Come and bite my burgers,

I'm hot and cheap and quick!

Links
Buffy is the easy-going Buffet Car in Starlight Express. She is close friends with Ashley, Dinah and Pearl, who form the Passenger Train.

Buffy is an easy-going girl, "Hot and cheap and quick" is how she introduces herself. She's a smart, practical girl, she doesn't get emotionally attached or too upset when things don't go her way. She'll flirt with anyone, and is willing to go along with changes of plan and adapt to new situations.

Buffy's first entrance in the original show is "Call Me Rusty", where she and the other coaches try to dissuade Rusty from what they see as a hopeless case, him wanting to enter and win the race. She then also joins with Dinah and Ashley trying to dissuade Pearl from racing with Rusty, explaining that, sweet tho he is, he lacks "A Lotta Locomotion". Buffy hooks up with Espresso for Race One, but they're beaten by Greaseball and Dinah. When Dinah falls apart singing "U.N.C.O.U.P.L.E.D.", Buffy patiently waits to let her get her story out, before joining Belle and Ashley in picking her up again. Buffy and Ashley are particularly close in the choreography for "Girls' Rolling Stock". In the revised London show, Buffy got a lot more racing to do once Caboose was cut - she ended up racing with Rusty for the Uphill Final, and then with Electra for the Downhill Final. This re-arrangement required a few new lines of dialogue - after Girls' Rolling Stock, and Purse has collected Dinah, Ashley and Buffy discuss what to do next.

Then an additional refrain in Dinah's Disco after Dinah has uncoupled Electra, in place of calling for Caboose:

The Bochum production puts Buffy racing with Bobo while Ashley takes Espresso, although this switch has no consequences for the plot, as they both lose in the second Race.

In Expreso Astral, her name was hispanicized, and she was known as Botana. 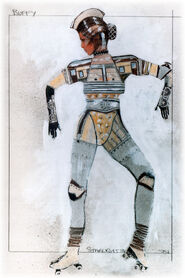 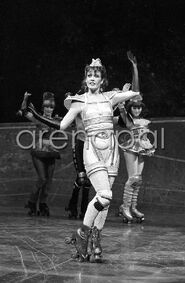