Hiding at the back of the freight train... unsupected!

Male
Caboose is the brake van at the back of the freight train. He is also one of Starlight Express's main villains: he sabotages engines in the race, either by putting on his brakes, so they're too slow to compete, or refusing to use his brakes, so they crash.

Caboose's role has been changed dramatically in different productions, from being a secondary principal role with two solos, to being cut entirely.

Caboose has had two names, depending on the production.

In the original production he was named 'CB', a reference to CB radios. Several examples of CB radio code pepper his lines, including 'ten-seven' and 'smokey bear', which refer to a dead body and a sheriff.

The Broadway production renamed CB, ‘The Red Caboose’ – or ‘Caboose’ for short – and dropped all references to CB radios. He has been called Caboose in every production since then.

We first meet Caboose in Freight, where he's pulling up the back of the freight train. He's unlike the other Freight, he's smaller and he doesn't carry goods.

At first, Caboose seems bright, sweet and helpful. We don't see his dark side to him until the first race, but immediately that is contrasted to his sweetness towards Dinah in "There's Me". It's only in the second act that we see Caboose go off the rails completely.

Sometimes Caboose can be seen smiling and waving to his friend Dinah. He keeps well back when Electra appears, and can't resist his magnetism any more than anyone else can. Caboose races with Hashamoto in the first race, against Greaseball and Dinah, and Espresso and Buffy. But he helps Greaseball take the lead, by slowing down the Bullet Train at the crucial moment.

After Greaseball and Dinah have confirmed their place in the final, Dinah twigs that the race was not completely honestly won. She complains, and Greaseball pushes her away. Caboose catches up with them, and as Greaseball tells him Dinah is on her own, Caboose sings "There's Me" to comfort her. She's not alone, she has a friend. His motivation is unclear - is he in love with her? Does he genuinely feel sorry for her? Is he offering her friendship? Or he playing a manipulative game? Or is he simply insane?

After the big drama of Poppa winning a spot in the final and nominating Rusty to take his place, Caboose takes Rusty's side and volunteers to race with him. But in an aside to Greaseball he says "Trust me, I'll sort it out! (Tell ya later what it's all about!)" Soon after we catch up with Caboose chatting on his radio, as Greaseball finds him. Greaseball asks who he's talking to, and doesn't like that it's Electra. He threatens Caboose: "Just remember whose side you're on!". After Greaseball and his gang leave, Electra turns up. Caboose tells Electra his plan to wipe out Rusty, and reveals his sordid past in "Wide Smile, High Style"

The Uphill Final sets off, with all three engines - Rusty, Electra, and Greaseball - sure that Caboose is on their side. Rusty quickly learns the truth, as Caboose throws on the brakes, and Rusty is slowed down to the point that he misses the crucial stage of the race where the bridge ferries the racers up to the top level. Rusty's disqualified. But the race ends in a dead heat, so Greaseball and Electra will have to repeat the head-to-head final.

Rusty complains that Caboose cheated, but nobody listens to him. But Pearl realises that Rusty was cheated, and when she goes to complain she's bullied into staying. Caboose gloats, teasing the disheartened steam engine, "Call yourself an engine? You're no Engine!" as he leaves, finding the damage wrought hilarious.

Later, as the engines prepare for the re-run of the Final, Dinah has reached the end of her patience with Electra, and disconnects him. In a panic, Electra calls for his ally, Caboose, to race with him instead. As they assemble for the re-run, Rusty turns up with Dustin and pushes into the race. The race is violent and dirty, with Electra shooting lightning and Pearl getting derailed. Electra and Greaseball fight over Caboose, and he causes an enormous crash right before the finish line, resulting in Rusty and Dustin winning the race. Humiliated by losing, Electra storms out, but in even worse shape is the mangled wreckage of Greaseball and Caboose, who've gone through "One Rock & Roll Too Many". Caboose has learned his lesson from his devious behaviour.

In Heat 1, Caboose raced with Turnov, prompting mid-80s political discussion of the treacherous RED Caboose racing with the Russian engine. "There's Me" becomes a duet with Dinah taking a verse. His introduction for "Wide Smile, High Style" becomes snappier and clearer, as he tells Greaseball he'll wipe out Rusty, and Electra that he'll wipe out Greaseball. He also is clearly less sane,

Every hero that you trust, in the end they all go bust!
Robin Hood kept all the money, Piglet poisoned Pooh-bear's honey!
E.T. had no flying permit, Donald Duck has eaten Kermit!
Bambi set the woods alight! And the Red Caboose is not Snow White!'

The Uphill Final staging was also changed, rather than the racers needing to be on the bridge before it moved and the race ending in a dead heat, instead the race devolves into a punch-up, and when Rusty and Caboose pull out into the lead, Greaseball tells Caboose to Brake/Break him. Caboose sends Rusty crashing down the set, to land, injured and unable to continue, and Control cancels the race.

Another change was in cutting Electra's tantrum song "No Comeback", which added Electra to the crash at the end of the Race, making "One Rock'n'Roll Too Many" into a trio rather than a duet.

The London production updated around 1988 to bring the show in line with some elements of the Broadway production, including the re-written elements of Caboose's role, and cutting "No Comeback". In late 1992, "The New Starlight Express" cut the role of Caboose entirely as well as cutting Belle.

The role of Caboose was significantly cut down for the 2003 US Tour, and subsequent UK Tour. The entire scene after Heat 1 was cut, including "There's Me". Caboose's other solo "Wide Smile, High Style" was reduced to simply the dialogue. This meant that the role was small enough to be considered ensemble not a featured role, and lowered the actor's pay grade appropriately.

In 2008, the German production followed the example set by the UK Tour and cut down his role significantly. They did partially reverse the decision, however, reinstating a shortened version of "Wide Smile", where Caboose initially talks to Greaseball and Gang, telling them his plan to wipe out Rusty. Greaseball threatens him and leaves. Caboose begins to soliloquise, but shortly after, Electra and his Components arrive and dance with him without knowing his plans. The crucial bars where Electra learns of Caboose's plans, which explain his presence, have been cut.

In 2018, the show was extensively re-written in honour of the production's 30th birthday. This included a dramatic overhaul for Caboose: an entirely new costume and a new motivation in life - he is now obsessed with money. His cheating, dirty deeds are all bought and sold. His new costume reflects this "Mobster" attitude with a trilby hat, pinstriped red on navy suit, and a big "Bling" brake wheel on a chain around his neck. Musically, all traces of the "There's Me" melody have been cut and replaced by the "Wide Smile" melody, for example his introduction in "Freight" is now sung to the "Wide Smile, high style, that's me" tune. This has a considerable impact on the character, as he is no longer perceived as "Nice" - he's worrying, disturbed, throughout the show. There is no longer two sides to his character, other characters such as Greaseball and Electra are not required to like him, merely to buy his help to throw the race in their favour.

Caboose's various costumes (London, Broadway, Bochum, Mexican, etc) show that he used to be a boxcar, but now he is a caboose, which means he carries humans instead of goods. Cabooses would have sleeping quarters, a kitchen, and a conductor's office, and older models could whistle and were a key element in older braking methods.

The original 'CB' costume was styled to resemble a trucker. In the US, the railroad freight industry has been undermined by highway services. Refrigerator cars are mostly no longer seen because of the refrigerator compartments on semi-trucks. It is fitting that the most formidable villain in Starlight Express dresses like a trucker.

The logos featured on Caboose's costume are rail organisations no longer operating (known as "fallen flags" in the railroad community). Companies include Pennsylvania Railroad, Chesapeake and Ohio Railway, Baltimore and Ohio Railroad, Chessie System, Northern Pacific Railway, Great Northern Railway, Central Railroad of New Jersey, Penn Central Transportation Company, and Canadian Pacific Railway, which is the only one still in use.

On April 1st 2015 Starlight Express Bochum announced via twitter, that Caboose's costume would be changed from red to green, to match his character better - this was very quickly found out to be an April Fools' prank.

Red Caboose's hat has holes on the side. These are supposed to be the windows on his cupola (where the conductor would sit and watch the freight cars). Cabooses with cupolas came in two styles: Eastern cabooses had their cupolas in the center, whereas Western cabooses had them on one side. Of course, having the cupola in the center of Caboose's costume is the obvious choice, but the costume designers took it a step further. Just about every railroad represented on Caboose's costume were actual Eastern companies who used center-cupola cabooses (with the exceptions of the Great Northern Railway, the Canadian Pacific Railway, and the Northern Pacific Railway, which is that logo featured on his cap).

The 2018 rewrite in Bochum saw the intense redesign of Caboose, with the complete disappearance of all company logos that were previously used on his old design, the only feature remaining being the cupola windows on his new fedora shaped hat. 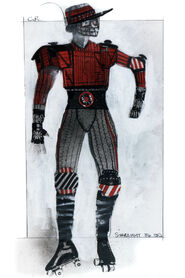 The puns flow thick and fast with Caboose, particularly with the homonyms of "Brake" and "Break". Is he intending to slow down his race partner, or damage him? The audience can't tell.

In the original version of "C.B."/"Wide Smile, High Style", C.B. mentions, "State police, they don't suspect I got Old 97 wrecked." This is a reference to the Wreck of Old 97. In 1903 an American mail train had been speeding along and could not brake in time and crashed. However, mail trains were a type of passenger service and would not have had a caboose.

Conductors on freight trains stayed in the caboose and were considered the "brains" of the trains. As a result cabooses were known as "brain boxes". Engineers naturally were in the locomotive, which was known as a "hog", and so the engineers were called "hoggers" or "hogheads", implying that they were not as intelligent. Caboose is portrayed as being the most intelligent in the show, able to dupe over three different engines.

Cabooses can whistle. This was important for the conductor to signal to the engineer if a truck was uncoupled or some other problem. However, there were some difficulties as sometimes whistles were misunderstood (which could be dangerous). The caboose lost its whistle with the advent of two-way radios. A caboose whistle can be heard here: [1]