Cameron, who is originally from Scotland, trained and gained his degree at the Arts Educational Schools, London. Whilst there he played various parts including Doody in Grease, Coricopat in Cats, Vinnie in Lucky Stiff, Corrinda in Cinderella and Rex in Brideshead Revisited.

Other credits include the film Diggin It for Westminster College and the originl cast recording of Just So, the Stiles and Drewe musical based on the stories by Rudyard Kipling. This was followed by a workshop with them called Soho Cinders.

Cameron has also worked as a session singer, recording singles and albums all over the world for numerous artists. Most recently he played the Policeman in a workshop of Bloodbath (The Venue, Leicester Square).

He would like to thank his family and friends for thei neverending support, and dedicates his performance to his mother. 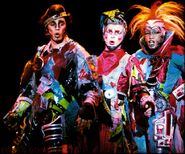 Caboose, UK 2007
Add a photo to this gallery
Retrieved from "https://starlightexpressmusical.fandom.com/wiki/Cameron_Neilson?oldid=32056"
Community content is available under CC-BY-SA unless otherwise noted.