Starlight Express marks Christopher Lipari's return to international touring. Most recently he was featured in two Italian television series as principal dancer and headlined a cabaret act in Geneva, Switzerland.

Beginning his professional career at age 13 in musicals (The King and I, Oliver!, The Music Man) he began intensive training as a figure skater and subsequently performed in the first ice show to tour Saudi Arabia.

For the past two years he has appeared on the soap opera Guiding Light and continues to operate a custom-designed clothing business from his home in New York City. 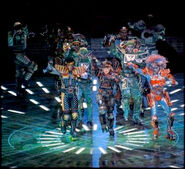 Weltschaft, 1987 Japan/Australia Tour
Add a photo to this gallery
Retrieved from "https://starlightexpressmusical.fandom.com/wiki/Christopher_Lipari?oldid=44416"
Community content is available under CC-BY-SA unless otherwise noted.