Darryl Paul trained in dance from the age of 13 at numerous stage schools in Leicester, before moving to London, where he started his performing career. Darryl first joined Starlight Express in London and, after that, her performed in the German production.

It was also in Germany that Darryl bought his first drum kit and found his interest in drums and percussion, which led to various jobs as percussionist and drummer. After studying at Drumtech, he decided to tour with Heartbeat - the Rock 'n' Roll Musical and also Buddy - the Buddy Holly Story on tour.

Darryl also has a passion in the fitness industry and has, for the last five years, been working as a personal trainer and fitness instructor in Europe.

This is Darryl's third time performing in Starlight Express and he is looking forward to putting on the skates again.

Darryl Paul aged eighteen was born in Leicester and trained at the Janet Dupont Stage School. He began his career with the choreographer Phil Winston. Darryl has taken part in various fashion shows around the country and has appeared in many pantomimes and on television. This is his first West End show and he is very pleased to be in Starlight Express. 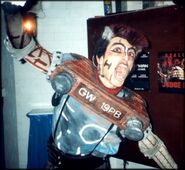