Starlight Express marks Dawn's West End debut and this is her fifth year with the Company.

Dawn Buckland is seventeen years old and was born in South London. She trained at the Sylvia Young Theatre School for three years where she studied dance, drama and singing. Her television work includes numerous television commercials, appearances in Eastenders, Casualty, a reconstruction for Crimewatch and The Paul Nicholas Show in whcih she played a street kid. Dawn has done work for charity shows such as The Children's Royal Variety Show and Night of a Hundred Stars. She has also been in pantomime for the past four years, most recently in Mother Goose at the Crucible Theatre, Sheffield. She is very keen on all sports, especially ice skating and gymnastics.

Dawn as Ashley with Jason Capewell 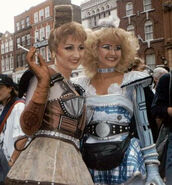