After completing his certificate II in Dance performance he graduated early to fly abroad to be one of the lead vocalists in X-systems' Garfield's Cool Christmas. Abroad is where Duane's career took off having then flown to Germany where he played the lead roles of Bobo and Rusty in Andrew Lloyd Webber's German production of Starlight Express, after two years Duane then went on to travel the globe as a lead vocalist/Dance Captain aboard the world cruise liner M.S. Amadea and then finally returned to Australian shores to be a part of the cast of High School Musical - Live on Stage.

Duane is thrilled to put back on his skates in the NZ production of Starlight Express and dedicates his performance to his partner for their love and support. 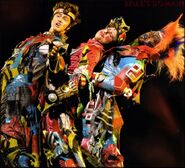 Caboose, NZ 2009
Add a photo to this gallery
Retrieved from "https://starlightexpressmusical.fandom.com/wiki/Duane_McGregor?oldid=39685"
Community content is available under CC-BY-SA unless otherwise noted.