I am electric, the future is me!

Engine of the Future

Varies
"The Engine of the Future", wild and startlingly different from everyone else, Electra brings the excitement and danger of the unknown, a star presence with his entourage of Components.

Electra is arrogant, supremely self confident and self centred. Electra is very used to getting exactly what he wants, when he wants, thanks to his personal entourage who enforce his will and cater to his every desire.

Electra enters the show proudly proclaiming, "AC/DC, it's okay by me. I can switch and change my frequency," ("AC/DC"). This reference often goes unnoticed by younger fans of the show, but in the mid-20th century, "AC/DC" was common slang for bisexual[1]. In addition to these lyrics, Electra is also frequently seen interacting amorously with all of his components, who are traditionally portrayed by an assortment of male and female actors.

In his memoir, Unmasked, composer Andrew Lloyd Webber refers to "AC/DC" as 'transgender electro-pop'[2]. In addition, the casting notice for the 2019 Bochum cast describes Electra as 'gender fluid / androgynous'. This makes Electra one of the first canonically bisexual and gender fluid characters in mainstream musical theatre.

Electra shows up as a surprise contestant, as Control tries to explain entries. His arrival drains the power to the train yard, causing a blackout and loss of movement to the other characters. In most official productions, Electra descends from the ceiling, often on a moving bridge. He proceeds to sing about the many powers afforded to him by electricity. During his song, he uses his power of magnetism to draw Pearl to him.

However, Electra doesn't always get his way. During "Pumping Iron", he can often be found watching from the side in fury as he temporarily loses half his components to Greaseball's rock'n'roll appeal.

Since Pearl does not immediately react positively to Electra's invitation to be his racing partner, sent through Purse, he finds her in person and easily persuades her to race with him instead of Rusty. In the original production, Electra raced with Pearl in the second heat, earning his place in the final over Rusty and Belle. However, when the races were re-formatted to a more condensed format, Electra was moved to the first heat, where he goes head to head with Greaseball. The rivals draw in a dead heat, leaving their feud to be decided in the final race.

During The Rap, Electra loses control of Pearl when she is charmed by Greaseball. He decides second best would be Dinah, and they race together in the uphill final. Afterwards, Dinah disconnects him, complaining that he lacks the apparatus to whistle at her ("He Whistled At Me [Reprise]"). Electra then turns to the Red Caboose, despite Caboose revealing his traitorous nature to Electra. Caboose's insane maneuverings in the downhill final end up being Electra's downfall, causing a crash that allows Rusty to take the lead, and the title.

In the original production, Electra is humiliated by losing the race, and storms off in an electric tantrum, screaming "No Comeback" in fury. Having no way to save face after such a humiliating loss, he swears to leave and never return. This song was cut from the Broadway and subsequent productions. Instead, Electra is involved in the crash that also damages Greaseball and Caboose and therefore sings "One Rock'n'Roll Too Many" with them. Afterwards, when Poppa tells Greaseball he could be converted to steam, Electra somewhat sarcastically asks if he too could be converted to steam. The very suggestion enrages his components, but all is sweetness and light by the end of the show.

Electra is often accompanied by his five minders:

Technically, these are the trucks that he, as an engine pulls from place to place along the railroad. However, as seen in the original 1984 designs they were originally designated as an "Entourage" that befits a superstar, with Krupp as the security guard, Wrench as the medic or personal trainer, Purse as the accountant, Volta as the stylist, and Joule as the pet minder.

Electra's five components have been fairly continuous throughout productions, apart from the Japan/Australia tours, which increased his entourage to 8 by doubling Joule, Volta, and Krupp. The US/UK Tours reduced the components to 4 by cutting Krupp. In 2017, Krupp was cut from the Bochum production, and in 2018 Purse was replaced by Killerwatt, a fusion of characteristics of both Krupp and Purse.

Electra is extremely attractive, elegant and powerful. His costume is a classic example of 1980s futurism, with strong angles, complex compound shapes, and futuristic metallic textures. It includes curved shoulder boxes, a chest box, and a striking mohawk wig. As technology has advanced, so has Electra's costume, with the addition of electronic lights built in to his chest box and wig and wrist-mounted fireworks to create an arc of sparks.

The non-replica "On Ice" production completely re-invented most elements of Electra's costume, with the only obvious similarity being his signature mohawk. The lines became softer and rounder, and the color was changed from red and blue to yellow and grey.

In 2018, for the German production's 30th anniversary, Electra's costume was overhauled with a monochrome palette and colour-changing panels built into the existing armour. His mohawk wig is comprised of fibre-optics, and his makeup has been re-designed into a more neutral, human face. 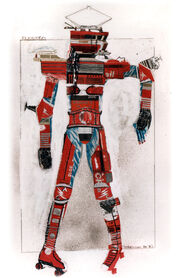 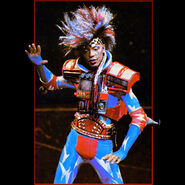 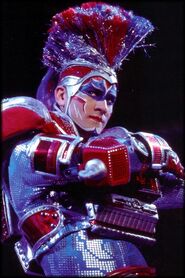 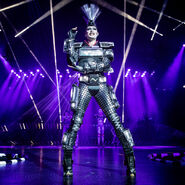