Emma Jenkinson was born in North Ireland. She started taking dance lessons at the age of three. She studied at the Musical-school Laine Theatre Arts in Epsom, England.

In 2014 she got married to her co-actor Andrew Prosser and is since called Emma Prosser.

She has played Agneta in "ABBA celebration" and was part of the company of "Seeing Tomorrow" and "Snow White and the seven Dwarfs". As a dancer the appeared in the MTV-show "Shakedown Dancer" and in the music video "Hit 'n' Run" by Monrose. Emma also was a backup dancer and singer for the bands Boyzone and Westlife at their concerts in Dublin. 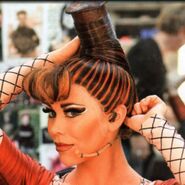