Starlight Express the Musical Wiki
Register
Don't have an account?
Sign In
Advertisement
in: Cast Bochum, Cast US Tour 1, Cast Vegas,
and 2 more

BroadwayWorld
Eric Clausell originated the role of Electra in Bochum.

In the 1990s he left full-time acting and retrained as a clinical psychologist. He now lives and practises in Tacoma, Washington[1].

Performed in Cats in Hamburg. 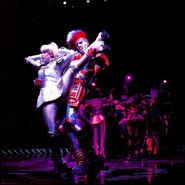 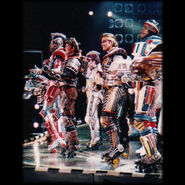 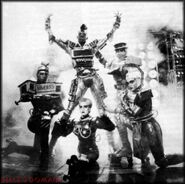 As Electra, Eric Clausell makes a shocking entrance by descending to the stage as the hottest challenger to race against the fastest contenders of the rails. It's this point of the show that Eric finds as his favorite. "I get to come out of the ceiling and be glamorous. A superstar for five minutes."

Eric has been performing the role of Electra for many years. He originated the role both in Germany and the U.S National Tour. He has found that the shorter Las Vegas production has pushed his stamina much more than the over two hour German version. "The U.S. show is cut down to 1 1/2 hours. Most every part of my role is included but there isn't much break time."

A Taurus born on mothers day 1963, Eric grew up in the Bronx, New York, however he no longer sports the accent. Although he enjoyed to sing and dance for fun, Eric never thought of doing it professionally until he was in high school. "I was always wondering what I was going to do in life. When I was in the 10th or 11th grade a friend of mine said he wanted to be an actor and I thought, if he could do it I could do it." Once he decided which path he wanted to take he enrolled into dance, acting and singing classes earning a scholarship in dance along the way. With the encouragement of friends like Joanne Robinson (assistant to choreographer Gillian Lynne - Cats), Eric was well on his way to make his impact in musical theatre. "From my first audition with her she liked my talent a lot. She believed in my talent. She pushed me and inspired me with her knowledge and position. I learned so much from her. She really helped turn me into a really confident performer. She's amazing!"

Eric is enjoying his time in the Las Vegas production and finds the humor from Dawn Marie Church (Pearl) helps him get through the show. "This is a fun group of people. There are a lot of funny people here." Laughter also helps when the occasional mishap may occur like the night a casting director friend came to see him. "In the high kick in The Rap, when the entire cast is pointing at me, I kicked sooo hard I bounced - dead center. It was horrible, I got up and was lost in the choreography!" In his spare time, Eric spends time at the gym, goes to school to study psychology, volunteers at hospice and takes piano lessons. He plans to continue his studies and become a psychologist. Until then a couple of roles that he would be interested in performing are those of John in "Miss Saigon" and Tom Collins in "Rent". HE would also like to be in "Smokey Joe's Cafe". Of the future this fun-loving, easy going, no-nonsense performer who loves life to the fullest would like to make a career in psychology where he could council people, and publish books on how to be happy and peaceful in life. Basically help the world be a happy place.