Erin is London born and 23 years old. She trained for her varied career for two years at Italia Conti Stage School.

She has sung in numerous vocal groups and toured to New Zealand, Africa, St. Moritz and all over England as a dancer/singer in Arlene Phillips' Hot Gossip. Erin also appeared in videos for Arlene with Donna Summer and the Bee Gees.

Other videos have included Olivia Newton John, Cliff Richard and she played the bride in Elton John's Kiss the Bride. She has also sung in vocal sessions with Lenny Henry and Leo Sayer. By total contrast, she appeared in the groups Bobby's Boys and Toto Coelo.

Appearances in Europe have been in all the top clubs where she also became a D.J.! In London she has been principal dancer in Hair Shows and has also played the role of Demeter in Cats for a year, understudying the lead role. 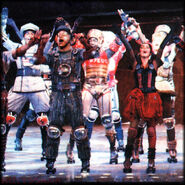