Greaseball's Gang are diesel engines, bullies who back up their boss at all times. They open the show, skating in formation with helmet lights piercing the dark. The gang all appear near identical and menacing.

In the original production, the three gang members with spoken lines were named "Tank", "Gook", and "Lube". In some revisions starting with the Broadway production, "Rolling Stock" follows "Entry of the National Engines". This means that half the ensemble are present as National Engines not Gang at the top of the show. Alternatively, including the original production, those same ensemble roles are Gang for the opening number. The gang also appear later in the show, supporting Greaseball and beating up Rusty as needed.

The actors who play the gang also usually play the National Engines, Freight, and Components. The Gang also turn into the track Marshalls. It is debatable whether Trax are included in the Gang. In some early productions "Gang 1" and "Gang 2" etc were dedicated roles, effectively on-stage swings - extra ensemble roles for performers who covered many other parts. 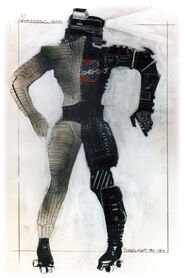 The Gang costumes are generic black diesel engines, lacking any particular eye-catching features. The Broadway-style costumes originally featured the Confederate Flag on the chest, and subtle coloured details to differentiate the costumes close-up. The Confederate flag was removed in 2017 when its political significance had been highlighted in world events. Originally the Gang had wigs while not wearing their helmets, these were phased out during the 1990s.

The Gang costumes are quick-change costumes, as almost invariably the Gang performers also play other roles throughout the show. For example, the Freight have only a few minutes between "Rolling Stock" and their own introduction. This is facilitated by the costumes held together with large, strong zips that can be changed quickly.

This article is a stub. You can help Starlight Express the Musical Wiki by expanding it.