Twitter
Graham Harvey was born in the US. He trained at the American Musical and Dramatic Academy in New York.

He was part of the company of "42nd Street", before joining Starlight Express, playing a lot of different parts over the years.

Graham Harvey thinks this tour is sweet as, bro! He is extremely happy to be touring New Zealandin his third production of Starlight Express.

Although he grew up in Tampa, Florida and loves Disney World and eating oranges in the sun on a hot, sandy beach, Graham also likes silver ferns, Tui, the All Blacks, the Haka, Jaffas, Outrageous Fortune and kiwifruit. His goal in life is to visit all seven continents. So far, after travelling to 111 cities in 12 countries on 4 continents, New Zealand is his favourite place to be.

Being a part of Starlight Express has given Graham the opportunity to have a steady career in musical theatre for over 5 years, which is more than any actor could ask for. He is extremely grateful to everyone who has been a part of keeping him involved in the show and hopes to continue with it in the future. Thanks to the company and creative team, especially Mikey for teaching me how to skate.

Kia Ora from New Zealand to my family and friends! 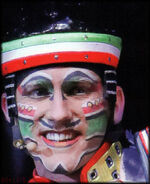 Ruhrgold, Germany 2014
Add a photo to this gallery

Retrieved from "https://starlightexpressmusical.fandom.com/wiki/Graham_Harvey?oldid=46884"
Community content is available under CC-BY-SA unless otherwise noted.