Helen Petrovna was born in Switzerland.

Other: Helen has worked for the BBC, ITV and Nickelodeon with performances on Abbamania, Murder in Suburbia, Genie and The Royal Variety Show. She has worked as a recording vocalist for Westlife and the Passionata Opera/Rock Album, appeared as a featured vocalist for the KitKatKlub at the Pigalle (Piccadilly Circus).

Born in Switzerland, she trained at the Bodywork Company Dance Studios in Cambridge and then intensified her knowledge in New York. Helen toured the UK with “West End Rocks” and “An Evening on the Westside”. She also delighted audiences with “Les Misérables in Concert” and as Jemima in “Cats”. Before she was engaged as Brooke Wyndham in "Legally Blonde" (Wales), she was engaged for various shows on the ships of the Norwegian Cruise Line. At STARLIGHT EXPRESS in Bochum, the Swiss woman was already on stage in the 2016/2017 season as Wrench and as a second cast Pearl, Dinah, Buffy and Components. This was followed by engagements as Tinkerbell in "Peter Pan" and various leading roles on the UK tour of "Legally Blond". Offstage, Helen has worked on TV productions such as The Royal Variety Show and can be seen in the film Chalet Girl. Helen is also the founder of Skyp The Gym and the author of broadherizons.com. 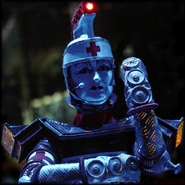