What time is it? It's Racetime!

Hip Hoppers/Gallery
The Hip Hoppers replaced the Rockies as part of the freight train in many productions of Starlight Express between 2003 and 2018.

The Hip Hoppers were introduced as part of David Yazbek's revisions for the 2003 US Tour. They were included in the subsequent UK Tour and joined the German production in 2007.

All tours had the hoppers in the following colour order:

Bochum was the only exception changing the colour order of:

In 2018, the Bochum production was significantly overhauled, and the Hip Hoppers were replaced by new versions of the Rockies, including a female Rocky 3.

However, Lloyd Webber reverted most of these changes for the following UK tour meaning that the Hip Hoppers effectively performed the same role as Rockies, but with "street fashion" costumes and simplified choreography, and without the boxing references.

While the majority of Hoppers have been male, the 2013 Asia Tour included a female Hopper 3 (Lauren Hearnden Mayer).

But unlike the Rockies, they do not spar with each other. Rather, they take every opportunity to rap and practice their hip hop dance moves. 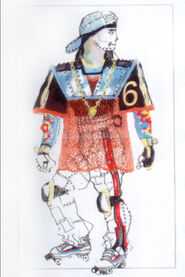 The Hip Hopper costumes draw on many stereotypical, dated elements of "Rap / Hip Hop / Street" fashion. They wear backwards ball caps or "gang" bandanas, over-size mesh-effect shirts with graffiti tags on them, and baggy pants. Contrary to other characters in the show, in their case the bare metal panel effect doesn't represent the character's bare skin. They also wear heavy gold "Bling" necklaces. Initially in the US Tour they wore their essential leather belts over the shirts, but later versions have slits in the the shirts through which the belt handles stick out.

The train-signifying elements in their costumes are rather less than in other characters, it is only the metal plating effect and the small amount of coal texture on their shoulders that gives away their intended designation as Hoppers. They don't have wheels on their gloves or their skates. Notably, Dustin has been established as a Hopper since the show's conception, but there are very few common features between them. In Germany they are still introduced as "Kastenwagen" (=box cars), like the Rockies. The same design elements have been used more recently in the "Street Cat Tugger" in the 2014 London revival of Cats.

Wig: Like the Rockies, the Hoppers don't wear wigs. To match their street fashion, they wear "metal" caps with some "Dreadlocks" attached (while all others wear a tight wigcap, the Hoppers' wig cap is knotted in the back of their heads, resulting in the "Dreadlock-appearance"), as well as a headband, that matches their costumes colour. The caps are rather difficult to sew and fit, so like the wigs, every actor has his own, instead of sharing. They don't have a fixed way to wear it, sometimes the shield is in the back, sometimes in the front, left or right.

Make-Up: The make-up is the part that resembles the Rockies the most, as the Hoppers have their numbers drawn on their cheeks. The main difference is, that the hoppers, as they have more metal parts in their costumes, have a silver stroke on their noses.