Hollie completed several years of training as a musical performer at various schools. Most recently she trained at the Guildford School of acting in England, where she graduated with a bachelor’s degree in 2018. As part of her training she played the role of Ellen in “Bullets over Broadway”, Lily in “The secret Garden” and Etcetera in “Cats”. She was also part of the musical “The Oliver’s 50th Anniversary” and attended Andrew Lloyd Webber and Richard Curtis Workshop “Unmasked”. Hollie is also a successful singer-songwriter: some of her video clips have received millions of clicks on YouTube. 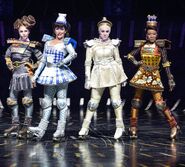