Holly graduated from the Urdang Academy.

Her television credits include: idents for ITV4 as well as the 2005 Royal Variety Performance broadcast from the Millennium Stadium in Cardiff.

Other credits include: founder member of the group Tymes 4 who released two top twenty hits and toured the UK and Europe. In 2002 Holly released "I'm in Heaven" with the producer Jason Nevins, which was a UK top ten hit. In 2003 her single "Touch 16" reached number three in the US club charts.

Holly is thrilled to be joining the cast of Starlight Express and would like to take this opportunity to thank her family and Anthony for all their love and support. 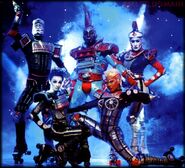