He has appeared in numerous West End productions and UK Tours including Wicked and Boy George's Taboo. He was in the original cast of The Who's Tommy, where he received an Oliver Award nomination for his role as one of the Pinball Lads and understudy Tommy.

James is thrilled to be playing Rusty again in this, the first UK tour of Starlight Express.

Other theatre credits include: 80s pop star Marilyn in the Boy George musical Taboo (UK tour), the title role in James and the Giant Peach (UK tour... not the peach!), the title role in Pippin (the Bridewell), James in Godspell (Chichester Festival Theatre), Iras in Antony and Cleopatra and Lucius in Julius Ceasar (both at Shakespeare's Globe Theatre), Spencer in When Harry Met Barry (Upstairs at the Gatehouse), Benjamin in Joseph and the Amazing Technicolor Dreamcoat (UK tour), Ben in Golem (New End Theatre Hampstead), Nick in Fame (Arena tour of Sweden) and Rusty in Starlight Express (Apollo Victoria).

James received a Laurence Olivier Award nomination for Best Supporting Performance in a Musical for his role in Tommy (Shaftesbury Theatre).

Over the past several years he has workshopped many new musicals. These include: Poe, The Happy Prince, Bombay Dreams, Shadowless and Only You Can Save Mankind".

His television credits include: James Scott in The Bell Rock, Simon in Doctors and Vajanya in Orrible, all for the BBC. Radio credits include Peter Pan for Stiles and Drewe on BBC Radio 2. In cabaret, James has appeared at the Water Rats, the Jermyn Street Theatre and ad lib performing his one-man show.

His debut album simply titled James Gillan is out now, and available at the theatre! For more on James visit www.jamesgillan.net. 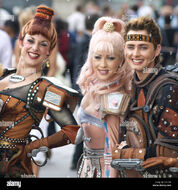 James Gillan as Rusty with Marissa Dunlop as Pearl, Emma Dodd as Dinah, Lucie Fentum as Ashley, and Leyla Pellegrini as Buffy in a photoshoot promo for the UK Tour 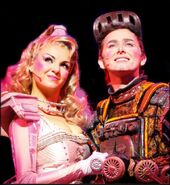