Jan Apel is an actor and musician. He is currently the lead guitarist in the ELO tribute band, ELO Experience[1][2].

Jan Apel was born in Copenhagen in 1965 under the sign of Aquarius. After he left school he became a construction worker and took dancing, singing and acting classes at night. He lived in the country with his mother and sister and when he moved to Copenhagen his bicycle was stolen so he took up roller-skating. During a holiday in London he auditioned for Starlight Express, got the job, and was soon off to Japan and Australia. After the tour he went to Germany to join the production there and now here he is, in London again.

Jan Apel was born in the sign of Aquarius in 1965 in Copenhagen, Denmark. On his fifth birthday his mother gave him a pair of roller-skates and he didn't untie them before he started gymnastics ten years later. He went on successful European tours in 1983 and 1984. In the meantime he became the lead singer in a rock band and via this and gymnastics found his way to a private musical school in Copenhagen. During his two years at the school he and a schoolmate made a cabaret called The Crazy Cool Cowboy Cabaret which they performed within the Carlsberg-revue with great success. They did another revue including a dragshow in Copenhagen, then went to Germany. But as the school was private and the revues didn't pay enough money for school fees, he took a job as a navvy. Now, choosing showbiz for a living and nearly living in the streets on roller-skates, he found it quite natural to audition for Starlight Express. 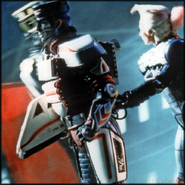 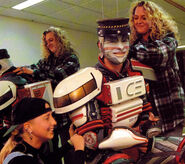 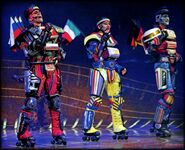 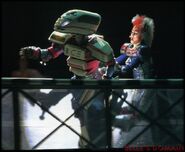