Jennifer Bizik (Joule) is very proud to make her stage debut in Andrew Lloyd Webber's Starlight Express. As a very young age, while performing with a local singing group, Jennifer decided to make the entertainment business her career. Since then, she has completed a number of television appearances, including the 1990 Emmy Awards, Hull Street High, Star Search '87 as a teen vocalist, and the Disney Production Kids Incorporated. Jennifer has also toured with L.A. Gear and, in 1988, signed a recording contract with CBS/Sony Songs. 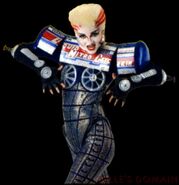