Joule/Gallery
Joule is one of Electra's Components in Starlight Express. Hot-headed and fiery, she is usually designated as the Dynamite truck.

"Joule was the animal truck, carrying Electra's "pets", but when she crossed the Atlantic for Broadway, she rethought her personality, and switched to the dynamite business."

Joule is wild and fiery, a tempestuous, emotional character. She is quick to anger, and very flirty.

While Joule is usually the last of the Components to change gender, she was played as male by Gary Albers for the final months of the Las Vegas production.

Joule is one of the Components, so has unswerving loyalty to Electra, and is very close to the other components. Often choreography pairs her with Purse. She races with The German Engine, and is frustrated when he fails to win. Joule has been seen flirting with Dustin and Flat-Top, and just about any other character onstage, dependant on cast. Joule and Volta are often considered as sisters or having a close sisterly-like friendship within the fandom. Other cases show them being shipped as a romantic pair together due to their close bond with each other.

We first meet Joule in the introduction to AC/DC, as Electra's components appear from the haze. She argues with Volta as to whether Electra is "Hot", or "Cool". Joule is usually the first Component to be seduced by Greaseball's Rock'n'Roll in Pumping Iron, leaving her master to dance with his rival.

Joule finds herself a race partner in The German Engine, and depending on the production, they do well. In the German production, the German engine makes it to the final. In other productions, he is knocked out in the 2nd heat, allowing either Bobo (London production) or Hashamoto (American productions) to take the 4th race slot. In the London production, Joule is furious at losing the race, and hauls Ruhrgold to his wheels, and spanks him as they leave the finishing line. In the 2018 German re-writes, Joule loses her race position to Carrie the Luggage Van and Joule no longer races. 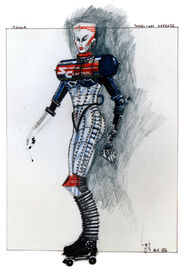