Ken Ard, also known as Kenneth Ard, is an American dancer, choreographer, actor, and singer who originated the role Electra in the Broadway production of Starlight Express.

He is most well known for originating the role of Macavity in Cats on Broadway, and has appeared in numerous other shows including Song and Dance and Smokey Joe's Cafe and was Wilbur in the movie version of Chicago

KEN ARD (Electra) marks his fifth Broadway show and his third for Andrew Lloyd Webber, including the original cast of Cats. He can be seen in and was the motivation for Geoffrey Holder's new book, Adam. He has appeared in numerous commercials and music videos and wants to pursue a career in the recording industry. "I dedicate this and all performances to my Mom and Aunt Mary Jo." 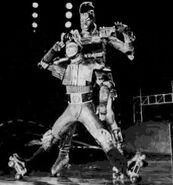 Add a photo to this gallery
Retrieved from "https://starlightexpressmusical.fandom.com/wiki/Ken_Ard?oldid=44221"
Community content is available under CC-BY-SA unless otherwise noted.