Like Ray Shell before him, Koffi did not perform the London uphill final as Rusty. Instead, Rusty was performed by a body double (usually Gary Cordice and sometimes Gary Forbes).

He also performed in Cats as the Rum Tum Tugger.

Koffi Missah made his stage debut in Hamburg, Germany at the age of twelve, as the lead singer in the band Cumbi Salis. In 1978 he joined the group Sugar Cane and released a single Montego Bay which led to an appearance on Top of the Pops. A year later Koffi joined a new group Ritz, who created the album Puttin' on the Ritz containing the single Locomotion. This went Platinum in Australia and New Zealand and topped the European charts. Television appearances at that time included Search for a Star and The Julio Inglesias Show in France. Later television work included The Oxford Road Show and a resident guest spot on The Cannon and Ball Show. In 1981 he released a single Warming Up with his band Paradise Alley. He later appeared in A Song for Europe (1982) with The Touring Company and the musical City with Tom Jobe at Riverside Studios. Other television work includes Freetime (ITV) and Cilla Black's Surprise Surprisewhen he sang Michael Jackson's Bad. With the disco smash Countdown, Koffi had a number one for three weeks. Other singles include Shelter with Circuit plus a dance track called Humanity with the Biddu Orchestra. He also sang the song Fascination for the movie Wilt. Koffi recently created the role of Clarence Birmingham in Alan Plater's Musical Rent Party at the Theatre Royal Stratford East.

Kofi Missah (Purse) was born in London in 1961. At the age of 10 he moved with his family to Germany, where at the age of 12, he formed his first band, with whom he made an LP and toured Germany and Denmark. Returning to England when he was 15, he joined the group Sugar Cane resulting in appearances on Top Of The Pops. Later, Kofi joined Ritz, who achieved considerable success on Search For A Star and many other TV shows and whose LP went gold and platinum. In 1982, he performed in Tom Jobe's City as a singer and dancer. As well as singing and dancing, Kofi composes and writes lyrics.

Koffi Missah as Electra with Kim Leeson as Pearl, London 1990 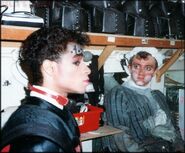 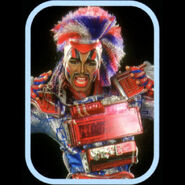 Koffi Missah as Electra with Colin Munro as Rusty, and Susan Torbeck (?) as Ashley in Bochum 1991