I am Krupp, Electra's Armaments Truck

Male
Krupp is Electra's personal bodyguard, the armaments truck in Starlight Express. His name is a reference to the German Krupp family, famous for manufacturing steel, ammunition and armaments.

Krupp is the muscle of Electra's entourage, the Armaments truck/bodyguard and chauffeur.  Krupp was cut from the US/UK tours, and from the German production in 2017.

Krupp has little solo stage time, but he is the first of Electra's components to enter prior to AC/DC. He is aggressive and alert to any threat to his master or his fellow components. He is sometimes portrayed as psychotic, enjoying the mishaps that befall other trains with hysterical laughter.

Krupp is the first Component to emerge from the mist and lasers, as a huge power drain has left the toy trains immobile. Originally he spoke in computer code - "Clear, Electra, Verify?" but in later productions he introduced himself in English, saying "I am Krupp, Electra's Armaments truck". Rocky 1 asks "Who is Electra?" But Krupp dismisses him saying "We ask the questions". His presence in AC/DC is reinforcing Electra's brute strength and firepower. Greaseball answers Electra's challenge with "Pumping Iron", during which Electra and components watch from the side. One by one, the female components are wooed away by Greaseball, despite Krupp's threats to them all. Krupp spends the rest of the number appeasing his master's anger.

In most productions, Krupp does not race, however in the New London production, he raced with Nintendo in the first heat, and while Nintendo had speed, he lacked control, especially pushed on by Krupp. Nintendo flew out of control, leaving Krupp, disconnected at the last moment, laughing hysterically at him as he crashed spectacularly. Krupp essentially took Caboose's role in this crash, motivated by his loyalty to Electra.

Krupp spends most of the show guarding the body of Electra, accompanying him as Electra and Pearl taunt Rusty and the worn out Poppa, Krupp reacts immediately Rusty threatens Electra in promising to race him. Krupp obediently follows his master's lead throughout the big argument of "The Rap", and dances behind CB in "Wide Smile, High Style". When his master's absence is forced by the races, Krupp leads the other components as race spectators. However after Electra's humiliating loss and crash, Krupp and the other components are horrified by the suggestion Electra could convert to steam, certainly not! 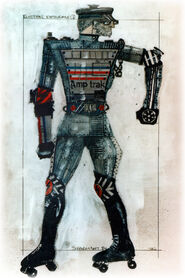 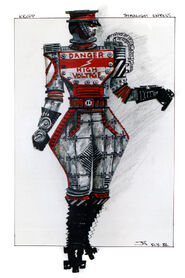