Lauren is the daughter of Debbie Hearnden.

Where do you come from?
I am from Bochum, Germany.

How is it to be in Bochum?
It’s my hometown. I like it!

Was appearing in the show a personal ambition for you?
Yes it was. I love the musical since I was a little girl.

Where did you audition for the show?
I did the audition in Bochum.

Had you seen Starlight Express before appearing in the show?
Yes of course as I’m from Bochum. I’ve seen the show a lot of times.

What do you think of the show?
It is amazing and a lot of fun to be part of it now.

Did you know how to skate before you appeared in Starlight?
Yes, but not in the way you need to skate here.

How was Skateschool for you?
It was hard, but also a lot of fun.

What are you like on your roller skates now? How do you feel on Skates?
I’m comfortable now after more than one year.

What is your favourite song of the show?
It’s “Rolling Stock”.

What is your favourite part of the show?
That is the skate around in act I.

What inspired you to pursue a career in musical theatre?
I am singing and dancing since my childhood, it has always been one of my biggest dreams.

Are the cast in Bochum very close?
Yes, very close and friendly. 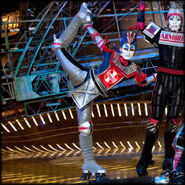