Leyla was born in Kent and trained at the Dance Consortium and Laine Theare Arts.

Television and film credits include: Blue Peter (BBC1), My Kind of Music (LWT), Loaded magazine's calendar launch (Channel 5) an advert for Microsoft and the film Julie and the Cadillacs (Channel 4 productions).

She has taught many theatre workshops and has participated in promotions and television appearances for musicals throughout the country, and is also the choreographer and assistant director for S4K's current production of Romeo and Juliet.

Leyla is thrilled to be back on her skates for this production of Starlight Express. 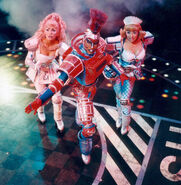 as Buffy, promo 2002
Community content is available under CC-BY-SA unless otherwise noted.
Advertisement