Mark Walker (Greaseball) is one of Britain's leading young entertainers having gained widespread recognition through his many television and cabaret appearances and he is regarded as a major talent for the 90s. Probably best known for hosting Central Television's Steal and his numerous appearances on the BBC's Laughter Show, Mark's other credits include LWT's Copy Cats, Live from the London Palladium, Summertime Special and many other guest appearances in Light Extertainment programmes. This versatile comedy impressionist began his career ten years ago in the Cabaret Clubs and Holiday Centres throughout the UK. His innovative and creative routines brought instant success and resulted in him winning The Daily Mirror's Young Entertainer of the Year Award in 1988. In the late 1980s and early 1990s Mark's talents have been in much demand, Pantomimes and Summer Seasons in Blackpool, the Isle of Wight, Southport, Torquay and Manchester have lead to him starring alongside such names as Les Dawson, Tom O'Connor, Little and Large, John Nettles and of course, his father, Roy Walker. However, Mark's ambitions have always been directed towards Musical Theatre and he is delighted to have the opportunity of making his debut in the West End by playing Greaseball in Starlight Express. 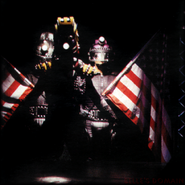 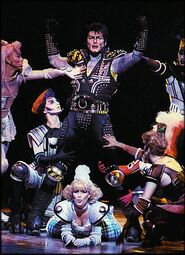 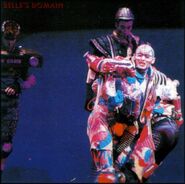 Add a photo to this gallery
Retrieved from "https://starlightexpressmusical.fandom.com/wiki/Mark_Walker?oldid=43438"
Community content is available under CC-BY-SA unless otherwise noted.