Masayoshi Hamana was born and grew up in Japan. He trained in Karate, and, by the age of fourteen was a certified black belt. He then turned to Roller skating and is now considered by many to be one of the best Japanese stunt skater. After only two years of skating classes he was placed second in a regional speed skating competition and two years later he was placed second in a national roller dancing competition. He has gone on to do extensive work using his stunt, skating, singing and dancing skills on video and on television in the series Ohayo Studio and Idol Kyowakyoku and has been televised jumping over 22 people laying side by side - a stunt unsurpassed by anybody in Japan.

In 1987 he performed as a stunt skater and understudied Red Caboose for the Japan/Australia tour of Starlight Express. He joins the London company having completed his second Starlight Express Japan tour where he played Flat-Top.

Masayoshi is 20 years old and a student at Soka University. He won second prize at the Kansai speed skating championship and also gained second prize at the Tokyo Roller Skating Disco. Last April he began dance lessons and became a regular on television. His ambition is to be a solo recording artist. 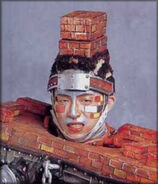 Flat-Top, 1990 Japan Tour
Add a photo to this gallery

Flat-Top, 1990 Japan Tour
Add a photo to this gallery
Retrieved from "https://starlightexpressmusical.fandom.com/wiki/Masayoshi_Hamana?oldid=40307"
Community content is available under CC-BY-SA unless otherwise noted.