One Rock & Roll Too Many

"No Comeback" was Electra's swan song for the first 4 years of the original London production.

Humiliated and infuriated by losing the race, Electra swears he is leaving, never to return. To make sure there is no misunderstanding, he even says goodbye to the Nationals in their own languages.

"No Comeback" was performed for the first 4 years of the London production. It was excluded from the second production of Starlight Express, on Broadway, and all productions after that. In its place, Electra took part in "One Rock'n'Roll Too Many".

It was subsequently removed from the London production around 1988.

Despite the song being removed, a fragment of the melody – "Clear my track" – remains in the show in 3 places: 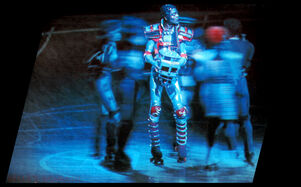