Female
Pearl is the newest of the coaches, the female lead of Starlight Express and best friends with Dinah the Dining Car, Buffy the Buffet Car and Ashley the Smoking Car. She is an observation car, although in Germany, she is referred to as a "First Class Car". Rusty the Steam Engine is madly in love with her.

Pearl is young, naive and innocent, and also very new to the railway. She has a lack of experience which is discovered throughout the events of the evening. She agrees, or has agreed, to race with Rusty without any apparent understanding of how seriously everyone else takes race partners: "But Pearl, you said you'd go with me / That was ages ago!" (A Lotta Locomotion original version intro) "You and me go steaming together / til someone better comes along" (Crazy) - Pearl is willing to drop Rusty if she gets a better option.

Pearl is generally interpreted onstage in one of two possible ways, depending on actress - either she is incredibly naive and easily distracted, thoughtless but well intentioned - or else she is a cold-hearted, callous and careless person. If she was so over-excited and carried away she never considered how her actions would affect those around her, until after the final race when both Electra and Greaseball have turned on her and abandoned her, then she can be seen as a sweet, foolish young girl. However if she is played as more knowing, stringing Rusty along till someone better presents himself, deliberately deciding to pick Electra over Rusty, deliberately taking Dinah's boyfriend Greaseball, to only notice Rusty when he saves her at the final, then she appears selfish and heartless.

Originally Pearl was searching for her dream train (He Whistled At Me), which reflects modern day fairy-tales of princesses always searching for their princes. She doesn't accept Rusty as her dream train, and partners with first Electra, then Greaseball for the time being while she still searches. When the two villains leave her to die however, Rusty saves her and she realizes that Rusty has been her dream train: someone who actually cared for her. (Only He)

In all other productions, she is happy with Rusty as her partner (Engine of Love). However when Electra arrives (AC/DC), she is dazzled by him and is flattered when he sends a message to her to be his partner. This leaves her in a dilemma to decide who to go with (Make Up My Heart). Electra is new, clean, shiny, and stylish. However, she had been with Rusty long enough to know that he is nice, and he had asked her first. She accepts racing with Electra thinking that it doesn't matter who she went with. She later partners up with Greaseball (Pearl Twirl), still thinking it didn't matter. Pearl only believes that it's all in fun and tells Dinah to "quit crying." After the finals (Downhill Final) she reflects on all that had happened that night. Both Greaseball and Electra had tormented Rusty after the Uphill Final, in the downhill final Greaseball used her as a block against Electra's attacks, Greaseball uncouples her during the race leaving her to fall off the track and die. Rusty was the only one who cared for her and he had saved her from sudden death. After realizing her mistakes (Only You), she couples up with Rusty, who forgives her. The two then couple up, and in earlier productions, share a hug, or in recent years, a kiss.

In the original London production, when Rusty asks Pearl to be his race partner, she rejects him, explaining that she has "a train I dream about, an engine moved by steam." Despite the fact that Rusty is a steam train, she still rejects him saying that he doesn't have the whistle her dream train has. She instead accepts Electra as her partner in the second heat for the time being until she finds her dream train. After "The Rap" she accepts Greaseball as her partner, leaving Dinah distressed and Pearl doesn't understand why. After the Uphill final, she learns what Greaseball is really like when she discovers that he was involved in a plot with CB and Electra to slow Rusty down. During the Downhill Final, Pearl is not focusing on the race but is distracted by Rusty. She eventually is injured by Electra's attacks and uncoupled by Greaseball which sends her on a runaway course towards the edge of the side, nearly causing her to die. Rusty however rescues her and she then realizes that Rusty was her dream train the whole time.

In all other productions, she has already been partnered with Rusty, but when Electra comes into the scene, she is dazzled by Electra and flattered that he wanted her to be his partner for the First Heat. However she has known Rusty longer, and he had asked her first. She is left having a hard time to decide who to go with. Before she could come to a conclusion, Electra appears and takes her for his own. She goes along deciding that it doesn't really matter who to go with, and that its only fun. After the finals when she had to be rescued by Rusty from a would-be fatal crash, she realizes that she should have partnered with Rusty in the first place and is worried that she had ruined everything, for Rusty and everyone whom she had unwittingly let down. Rusty then appears and forgives her, and the two partner up and in several productions, share either a hug or, nowadays, a kiss.

In 2018, the Bochum production underwent significant revisions for the show's 30th anniversary. Pearl's story has been fleshed-out and is the focus of the show. Pearl arrives in the trainyard at the beginning of the show - Rusty is sent to fetch the new coach, and he introduces himself and the other coaches to Pearl. She is now played as shy and less self-confident initially. Pearl still sings "Make Up My Heart" after a recit scene conversation with Rusty, but Control gets bored waiting for her to decide, so he tells Pearl that of her two "Lovers", she will go with Electra. 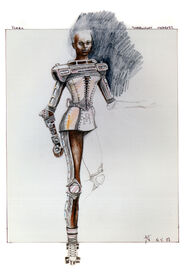 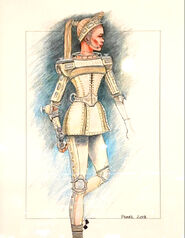 Anna Maria Schmidt won the role of Pearl in a TV talent show in 2008, but did not finish skate school and did not perform in the show.

Observation cars were generally first-class cars on passenger trains. They were usually the last car in a consist, and they were often the preferred car for travelling politicians and other notable people. President Abraham Lincoln was known to travel the United States in an observation car. As Pearl is the show's counterpart for the prince from Cinderella, she was likely made an observation car in relation to her role.