Pollyanna trained at the Doreen Bird College of Theatre and Dance for three years.     On leaving she joined the Northern Black Light Theatre Company for a National tour, playing the Lion Dancer in Kimoon and the Paper Dragon. She left the Northern Black Light Theatre to choreograph Junk Music at the Royal Albert Hall. Pollyanna's pantomime roles include playing Cinderella at the Mountbatten Theatre, Southampton, So-Shi at the Hexagon, Reading, and Sleeping Beauty at Swansea. She has most recently worked with Jim Henson's Muppets in The Muppet Show On Tour.

Her TV appearances include Brookside, The Wide Awake Club, A Teddy Bear's Picnic, Channel 4, and she was featured in The Silver Road, also for Channel 4. Pollyanna is also the featured dancer in the Dire Straits' video Making Movies.

She rejoins Starlight Express (as Pollyanna was a member of the original London cast) to tour Japan and Australia.

Pollyanna Buckingham (Swing) was born in March 1963 and trained at the Doreen Bird College in Kent.

After college, Pollyanna toured in the Northern Black Light Theatre Company, played in Summer Seasons and pantomimes with Ted Rogers and The Carry On Team and was choreographer for The National Children's Homes production of Merry Go Round at The Albert Hall. 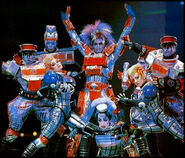 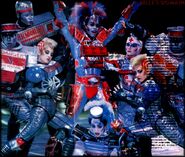