Starlight Express will answer you 'yes'! He's waiting to be found.

The wise older engine, Poppa/Mama was a champion in their day. Sadly, their day is long gone, and now they hang around the freight yard, singing The Blues and preaching of the Starlight Express, a mysterious force that helps trains in need.

From the show's conception up until the 2017 Workshop, the character was male and known as "Poppa". In the workshop process Poppa was reconceived as female and renamed "Mama". Poppa and Mama are essentially the same character. There was little change in their role, personality, and numbers, after the gender swap, so this page represents both of the character identities.

Poppa is the oldest engine in the yard. He was a champion many years before Greaseball came into the picture, and is now retired. The Freight and Rusty love and revere Poppa. Most of the other trains disregard him as a doddery, old fool.

The material never clarifies whether Poppa is literally Rusty's father, or simply a father figure to Rusty and the Freight. The relationship between Rusty and Poppa is likely different with each pair of actors portraying the two. In the original production, Ray Shell, the original Rusty, clarified in an interview that during his run, Poppa was portrayed as a father figure. This was due to Ray holding onto the previously cut song Be A Pump. The cut material made a distinction between the characters of "Poppa" and "Daddy" respectively in their emotional and physical relationship with Rusty. However, the song never made it to opening night.

We first meet Poppa after the first race, as we move to the freight yard. Poppa is singing The Blues, while the Rockies dance, Dustin plays the harmonica and Flat-Top waits for something more fun to happen. Rusty arrives, upset that he's lost Pearl as a race partner. But Poppa has an alternative for him, and introduces his old coach, Belle. Poppa reminds Rusty that the Starlight Express will help if he just believes in himself. With moments before the race closes, Rusty takes Belle. But they're racing against Electra and Pearl, and lose. Poppa then decides to show him - "I'm gonna show you that a steamer with the power within him / Can take on oil, and take on Electricity! Who'll come with me? Who'll come with me? Race behind me?". Rocky 1 has hooked up with The British Engine, Flat-top flat-out refuses, but Dustin is excited by the opportunity. The trouble that the race card is full is conveniently solved as the British train is scrapped, which Poppa interprets as a sign from the Starlight Express.

Poppa and Dustin race against Bobo and Ashley, and Turnov and Wrench. More by chance than design, Poppa and Dustin manage to win the race. But he's over-exerted himself, and collapses, gravely ill. Rusty and the Freight come to congratulate him, but find him unable to carry on. Poppa begs Rusty to take his place in the final, but Rusty still feels he can't - "I couldn't face that losing shame". Greaseball and his Gang, Electra, Pearl and Components all catch up and mock the steamers, calling them "Laughing Stock". Seeing Pearl with Electra is the final straw for Rusty, he takes Poppa's helmet from him and steps up.

Later, in "The Rap", a big argument rages, does Poppa have the right to give away his place to his choice of replacement? Or should it default to Bobo who came second in their heat? Poppa and Rusty eventually win the argument, and Rusty keeps his place in the final.

Poppa, old, and worn out, is not seen again until the end of the downhill final, where the winner, Rusty, has disappeared. Well, Rusty went looking for Pearl, but where is Pearl? Poppa picks up the wrecked Greaseball, who had disconnected Pearl at high speed during the race, and makes him lead Poppa and most of the cast to find Rusty and Pearl. Once they find the young lovers, Poppa leads the finale "Light At The End Of The Tunnel"

In later versions of the show without Belle, Poppa realises that Rusty isn't going to change his mind and immediately decides to race himself.

The 2017 workshop production made a number of changes to the material, one of most prominent being the introduction of more female characters. Poppa was reconceived as female, as were the French Engine and Rocky 3.

This change was carried into the German production in 2018, with Reva Rice cast as Mama.

Poppa's songs have remained the same in all productions worldwide.

He also features in Race 3 (OLC) / Race 2 (other productions) where by fluke he wins, but is too worn out to continue, and is declared a "Laughing Stock" by the other characters. During The Rap he typically pulls Dustin, but stays away from the main argument. 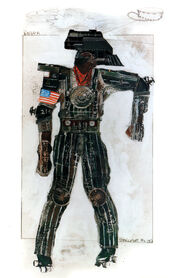 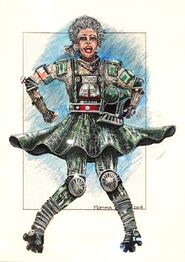 Is Poppa the Starlight Express?

On the other hand, it's possible that Poppa pretends to be the Starlight Express in order to motivate Rusty to race.

When asked about this, multiple actors have said that it is open to personal interpretation - there is intentionally no definitive right or wrong answer.

Why is Poppa's surname "McCoy"?

Poppa being named McCoy might be a reference to Elijah McCoy, [1] a black man born in Canada in 1844, the son of fugitive slaves, who went on to invent and patent many train-related inventions, and may be the source of the phrase "The Real McCoy".

What train line is Poppa part of?

Poppa's hat usually reads "Kansas City Central". However, no such company exists, though there is the American railroad Kansas City Southern. A mistake? A sign that Poppa is so old that his company doesn't exist anymore? Or that he isn't really an earthly engine?

The Broadway concept art showed that Poppa could have been potentially from the Burlington Northern[2] . Burlington Northern was in competition with the Union Pacific (Greaseball) and the Atchison, Topeka, and the Santa Fe Railway (represented by Volta and Wrench, two of Electra's components). As Rusty takes Poppa's place in the final, this would have probably meant that Rusty would be officially/unofficially representing the Burlington Northern, thus visually adding another layer to the competition between the three main engines. However, Poppa's hat was possibly changed due to the fact that the BN was founded in 1970, making it 17 years old by the time the Broadway opened. The Kansas City Southern[3], on the other hand, is the "second-oldest Class I railroad company still in operation."  Much more fitting for an old racing champion.

It is just as well that the BN idea had been dropped. In 1996 the BN merged with the Santa Fe to form the BNSF -- which would have made the visual competition somewhat awkward between Electra and the steamers.

The name 'Poppa' could indicate that Poppa is literally someone's father, or that he is seen as a father figure, generally.

While it is often assumed that Poppa is Rusty's father, there are inconsistencies in this theory - if Belle is Poppa's coach, that would make her Rusty's mother, or stepmother at least.  Yet he appears to be meeting her for the first time.

Another theory is that Poppa is Pearl's father. In this theory, Poppa knows that his daughter is going to be a desirable race partner, so he encourages Rusty, judging him to be a good partner for his daughter.  He already knows Pearl and Rusty had agreed to race together before she changed her mind and went with Electra.