Richard Stilgoe
"Pumping Iron" is a rock 'n' roll song in which Greaseball boasts about how attractive and powerful he is.

Greaseball arrives onstage and the various female characters flock to him. He dances with each of them, paying particular attention to his partner, Dinah, and the new girl, Pearl.

In the original London production, "Pumping Iron" was placed after "A Lotta Locomotion". Rusty left to fetch the Freight carriages as Greaseball arrived with the 2nd and 3rd class sleepers in tow.

When the show was revised for Broadway, "Pumping Iron" was moved after "AC/DC" – where it has remained ever since. Now the song serves as Greaseball's reply to Electra. He even seduces Electra's female components (Joule, Volta and Wrench) to dance with him. Placing "Pumping Iron" immediately after "AC/DC" also highlights the contrast between the 2 competitors, as Electra's futuristic electro music is answered by Greaseball's old-fashioned rock 'n' roll.

In the 2018 re-writes, the National Engines also join in during the dance break. The new dancing choreography pits the following engines with the following wagons: Greaseball with Dinah; Coco with Volta; Espresso with Joule; Ruhrgold with Wrench; Turnov with Belle; Manga with Carrie; and Brexit with Rocky 3. 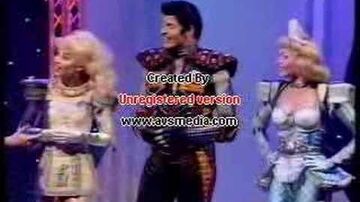 When "Pumping Iron" was repositioned, the characters of the Sleepers were removed from the show as they only existed for this one number. The performers doubled as Joule and Volta, so they would already be onstage after "AC/DC".