Please come, I'll be fired if you won't!

Male
Purse is one of Electra's Components, the money truck in Starlight Express.  He represents Electra's accountant - the money man, and is also used as Electra's messenger.

Purse is Electra's Money Truck, valuable and skilled. He is smooth, suave, elegant, and generally assumed to be second in command. He is often played as very camp, and arrogant. However his line to Pearl "Please come, I'll be fired if you don't" shows that he's not above begging when his career is on the line.

We first meet Purse in the introduction to AC/DC, as the components emerge from the dark, smokey stage. Purse is often seen mirroring Joule. Immediately following Electra's introduction, Greaseball enters to challenge the new-comer, and show off his testosterone-fuelled Rock compared to Electra's futuristic Electronic style. Electra and the Components move to the side of the stage as Greaseball takes centre-stage, but one by one he seduces the female Components away from their Master, much to Electra's fury. Often Purse spends the song trying to calm his Master, who is furious at this defection, but sometimes he is desperate to join the girls dancing, and it is up to Krupp to hold him back.

Purse next appears as Electra's messenger - sent to invite Pearl to race with Electra.

Purse remains lurking on the edge of the stage, listening to Rusty and Pearl argue. Often he mimes his eavesdropping, and summons her as if pulling on a rope to get her to come with him. Once he's satisfied Pearl is at least in two minds about racing with Rusty, he leaves to report to his Master.

Electra's coach that Purse referred to, was originally Volta. The original production made it very clear who was lined up to race with who, which was also where the Components were named rather than introducing themselves by name in the AC/DC introduction. Also in the original production Electra raced in heat two, with the rhyming couplet "Also he says that he prefers you".

We next see Purse after the last of the heats has been won, as everyone argues about whether Poppa has the right to nominate his replacement or whether the place in the final should go to his runner-up. Purse, of course, supports Electra entirely. Pearl defects from Electra to Greaseball, leaving the Electrics furious and wrong-footed for the final race. Electra then sends Purse to invite Dinah, who's happy to come along, "unless Greaseball changes his mind!" Shortly after, Purse is accompanying Electra and Components when they meet Caboose, who explains his plans to wreck Greaseball in "Wide Smile".

Electra and Dinah never make a happy team, and soon after the Uphill Final is cancelled, Dinah disconnects Electra. Purse and the other Components try to keep him from losing his temper, as Electra summons Caboose to race with him instead. Purse is witness to Electra's humiliation as he loses the race, and ends up a mangled wreck along with Greaseball and Caboose. At the end of the show, Purse is free to choose his own future. 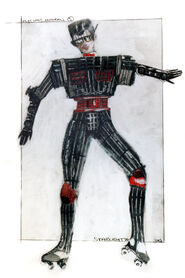 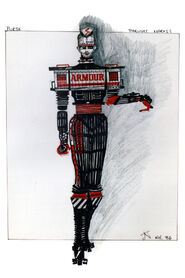