Richard Stilgoe
The Uphill Final, also known as Race 3 in most productions, takes place early in act 2.  The race is cancelled partway through however, and a re-run is called.  Greaseball takes this opportunity to explain to Rusty that he should withdraw from the race.

The fact that it is raced on the Uphill course is inconsequential except that the repeat race is run on the Downhill course.

In the Original production, there were three engines in each race, and three heats, each heat produced a finalist.  Those finalists were:

This race was run on the Uphill course. Part of the race course, rather illogically, required all the racers to board the Bridge to be lifted to the top of the course. CB showed his treachery to Rusty by slowing him down to the point that both Greaseball and Electra made it to the bridge in time, but Rusty was left behind as the bridge carried the racers away, leaving him no chance to catch up. However, the race finishes in a dead heat, requiring a re-match. This was by far the longest version of this race.

Musically, this race included themes for "Call Me Rusty", "No Comeback", "Pumping Iron", and "Wide Smile".

Later productions changed the race format to include a fourth competitor, in Germany it was the German engine Weltschaft/Ruhrgold racing with Joule/Carrie.  The Broadway Production gave the honour to Hashamoto and Volta, while the Japan and Australia Tour gave it to his twin Nakamura/Yamamoto and Volta.

Generally, this race lacks focus, the two main engines are so busy fighting that they lose sight of racing. Rusty and Caboose get too far ahead of Greaseball and Electra and Greaseball commands Caboose to "brake/break him" - resulting in Caboose sending Rusty sliding down the bowl to crash.  Everyone blames Rusty for the crash - somehow, and the marshals and Control do nothing to punish the other engines.  In the German/US shows, The German/Japanese Engine is so damaged at this point that he cannot continue in the re-run of the final. However, in the Japan/Australia Tours, Hashimoto's twin Nakamura/Yamamoto did the downhill re-run.

Broadway included the musical theme from "No Comeback" before the race was cancelled. Germany also featured "No Comeback" and "Wide Smile".

The revised London production cut Caboose, and added a fourth racer at the same time.  In this version Rusty raced with Buffy, and Bobo took the fourth place with Ashley, resulting in all four coaches competing in one race.

Without a treacherous Caboose to cause a wreck, this version of the action gave us a huge pile-up on the bridge as the race devolved into a stationary fist fight. Musically this version included simply the dedicated "race music" before the race was cancelled.

The US/UK Tour 3D footage doesn't include this race, instead the racers line up, but a fight breaks out before the race even starts. The racers are:

The US / UK filmed races use a three-engine race structure, but as Greaseball and Electra tied in the heat they both go through to the final alongside Rusty and Caboose. However in the UK Tour staging, the third race is somehow de-railed before it begins, in a short and confusing scene.  Unfortunately the audience, expecting another 3D race film, were generally distracted finding their "3D goggles" and within seconds we go from having the race about to start, to Rusty lying beaten on the floor. 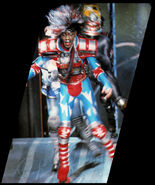 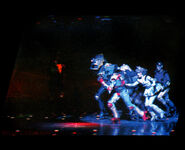 Electra and Dinah enter for the race

Start of the race