Robert Torti, also known as Bob Torti, is a American theatre, television, and film actor who originated the role of Greaseball on Broadway, a role which earned him a 1987 Tony Award nomination.

He is well known for appearing as the Pharaoh in the 1994 Broadway revival of Joseph and the Amazing Technicolor Dreamcoat, as well as the 1999 direct-to-video film based off the same production.

ROBERT TORTI (Greaseball). This marks his Broadway debut after numerous stage, television and film appearances. His portrayal in Godspell caught the eye of Universal's talent scouts and he was signed as a contract player. Moving East, dreams of joining David Letterman's softball team may become a reality - HINT! 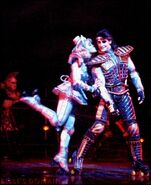 with Jane Krakowski as Dinah on Broadway, 1987 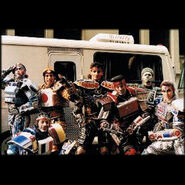 Broadway, 1987
Add a photo to this gallery
Retrieved from "https://starlightexpressmusical.fandom.com/wiki/Robert_Torti?oldid=44255"
Community content is available under CC-BY-SA unless otherwise noted.