Varies
The Rockies are boxcars, part of the freight train in Starlight Express.

They were replaced in some productions between 2003 and 2018 by the Hip Hoppers.

We meet the Rockies in Freight, as Rusty is sent to shunt the Freight train into place. The three near-identical Rockies are boxers, focused on their physical fitness and sparring with each other. The Rockies watch as the National Engines are introduced, and are sucked in to Electra's power in AC/DC. They dance and joke around while Greaseball is showing off in Pumping Iron. As the National Engines hitch up with their partners, Rocky 1 agrees to race with The British Engine in the second heat.

The Rockies hang out with Poppa in the freight yard, listening to him singing The Blues as they practice their breakdancing moves and co-ordinate their choreography. While the Prince of Wales being scrapped is very convenient for Poppa to take his place in the race, it does leave Rocky 1 without a race partner which upsets him.

Rusty brings the Rockies to Poppa at the end of the Race, some of them blaming Rusty for Poppa having worked himself into the ground. But they're loyal to their Steamer friends, prepared to defend them physically from their attackers.

After Rusty is wrecked by Caboose in the Uphill final, the Rockies offer him some tough love in "Right Place, Right Time". They have a rather fatalistic outlook on life, sometimes life sucks, you gotta move on. Rocky 1 tells Rusty "Face it, Rusty, you're out of it." The little steam shunter they know so well wouldn't be able to race against the big engines. But when the Starlight Express inspires Rusty to win, the Rockies are as delighted as anyone to have been proven wrong.

The Rockies are a reference to the Rocky movie franchise, starring Sylvester Stallone. The connection running that Rocky/boxer/box cars, multiple identical units. This source material influenced the choreography, with many boxing movements and poses, and the original costume design, consisting of boxer shorts, vest top, protective helmet, and tape stripe across the nose.

In 1983/84 when the original production was workshopped, there were three Rocky movies, and three Rockies onstage. By the opening of the Broadway production in 1987, the 4th Rocky movie (1985) had been produced, so a 4th Rocky was added onstage for Broadway, Japan/Australia, and Bochum. By 1990 however, Rocky 4 was cut from the German cast. Rumours abound that Rocky 4 was cut from the German production after a bad accident. London remained with only 3 Rockies.

The Rockies were replaced in some productions between 2003 and 2018 by the Hip Hoppers. 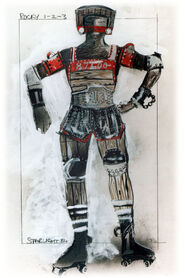