Sarah grew up in Windsor and attended the Susan Handy School of Dancing. The continued her training at Laine Theatre Arts, where she gained a National Diploma in Dance.

Television and music video credits include: The X Factor for Cee Lo Green; Big Brother commercial (Channel 5); Grease Is the Word (ITV); Ant & Dec's Saturday Night Takeaway (ITV); Germany's Next Top Model for Katy Perry; Turn Your Back on Love (I Blame Coco); Hit'n'Run (Monrose) and You Are the Music in Me for the Disney Channel.

Feature films include: How to Lose Friends and Alienate People and Captain America: the First Avenger.

Sarah would like to thank all her family and friends for their love and continued support. 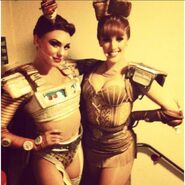