Shaun Fernandes, son of Antonio Santana Policarpo Fernandes, started his professional "Show Biz" career three years ago by training at Laine Theatre Arts. Whilst studying, Shaun appeared in a great number of British television shows, working for highly acclaimed choreographers. He has also worked in pantomime, appeared in Royal Variety Performances and, most recently, he completed a season with the English National Opera at the London Coliseum. At the age of 21, Shaun has already established himself in the modelling business not only in England but also throughout the rest of Europe. His ambition in life is to be rich and retire at 25! 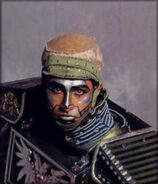 Add a photo to this gallery
Retrieved from "https://starlightexpressmusical.fandom.com/wiki/Shaun_Fernandes?oldid=44688"
Community content is available under CC-BY-SA unless otherwise noted.